Kyra Harris Bolden will be appointed to the Michigan Supreme Court beginning next year. She will be the first black woman to serve on the High Court and succeed retired Chief Justice Bridget Mary McCormack.

She currently represents Southfield and Lathrup Village in the State House – a position she has held since 2019.

She previously practiced as a civil trial attorney in Detroit. She also served as counsel for Judge John Murphy in Wayne County Third Circuit Court and as a court-appointed criminal defense attorney in Southfield’s 46th Circuit Court. At the beginning of her legal career she worked as a legal trainee.

Michigan Supreme Court justices are nominated by state political parties. The judges nominated by the Democrats currently have a 4:3 majority.

Bolden came third in the November 8 election for two seats on the Supreme Court. Those seats were won by Democrat-nominee Justice Richard Bernstein and Republican-nominee Justice Brian Zahra. 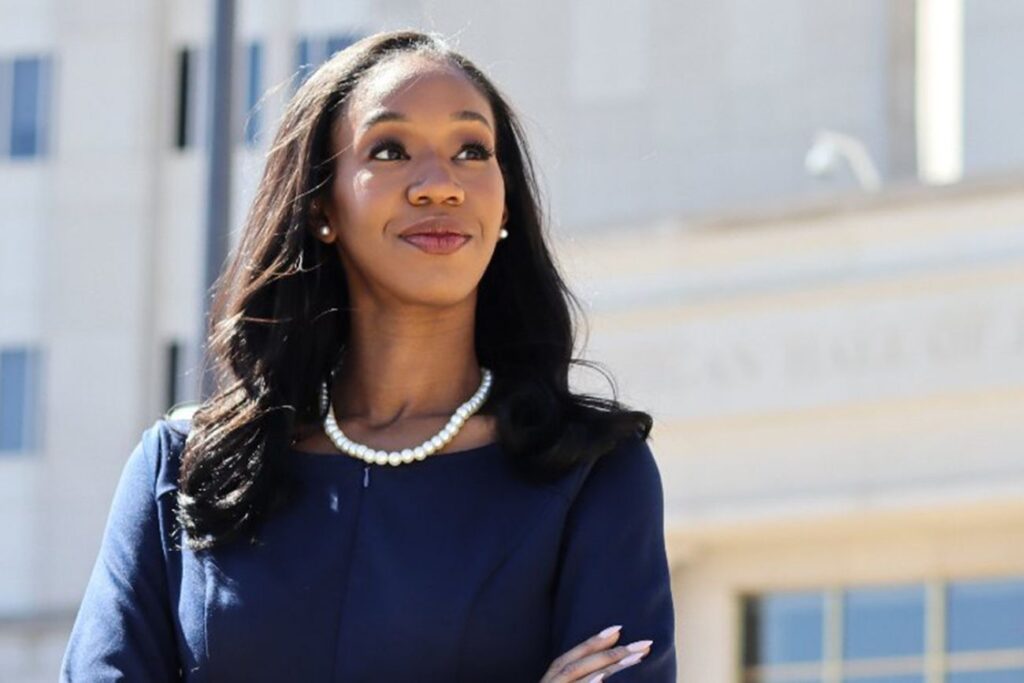 I will ensure equal access to justice, apply the law without fear or favoritism, and treat all who come before our state’s highest court with dignity and respect. – Kyra Harris Bolden

“I am incredibly honored to have been selected by Governor Whitmer for this Michigan Supreme Court nomination,” Bolden said. “I will ensure equal access to justice, apply the law without fear or favoritism, and treat all who come before our state’s highest court with dignity and respect.

“I also know that this moment – becoming the first black woman to serve on the Michigan Supreme Court – would not be possible without leaders like Shelia Johnson, Debra Nance, Deborah Thomas, Cynthia Stephens and Denise Langford Morris. These are the black women who paved the path I choose to follow. I hope that my voice in court will inspire future generations to achieve their dreams. I am humbled by this honor and ready to go to work on behalf of all Michiganders.”

Whitmer said that as a state official, former court clerk and trial attorney, Bolden has a passion for the law.

“She will bring to our High Court as a black woman – and as a new working mother – a unique perspective that has been left out for too long,” Whitmer said. “Kyra has been committed to fighting for justice for generations, and I know she will serve Michigan admirably as she builds a brighter future for her newborn daughter and all of our children.”

Michigan Attorney General Dana Nessel said the composition of the state’s courts should reflect the impact of the decisions on the population.

“I commend the governor for selecting Kyra Bolden to serve on our state’s highest court,” Nessel said.

Following McCormack’s resignation, the Michigan Supreme Court justices voted unanimously to appoint Justice Elizabeth Clement as the court’s next Chief Justice for the remainder of the current term. Clement is an agent for former Gov. Rick Snyder.

“We are pleased to welcome the first black woman to court and stand ready to work with her and lead an independent branch of government committed to the rule of law and a justice system that works for all,” Clement said.

“Governor Whitmer’s appointment of Kyra Harris Bolden to the Michigan Supreme Court marks a significant and momentous moment in our state’s history,” said John Johnson, Jr., executive director of the Michigan Department of Civil Rights (MDCR). “As the first black woman to serve in this capacity, she will bring a long-lost perspective to the deliberations of the state’s highest court. That alone makes this a monumental decision, but Ms. Bolden brings more to the table than her racial identity.”

As a state representative, Bolden serves as Deputy Democratic Leader and as a member of the House Judiciary and Insurance Committees.

She has worked on criminal justice reform and drafted and passed bipartisan legislation protecting survivors of sexual violence. It has successfully legislated portions of critical bipartisan legislation, including the Medical Frail Prison Reform Package, the Wrongful Imprisonment Compensation Act Revision and the Address Confidentiality for Survivors of Domestic Violence Package.

Bolden received her law degree from the University of Detroit Mercy School of Law and has a Bachelor of Science degree in psychology from Grand Valley State University.