The United States is back at the World Cup after a four-year absence. That could mean more local TVs are on at home and more time is spent watching games at restaurants in Northwest Arkansas.

The USA meet England in their second game in Group B at the World Cup in Qatar today at 1pm. The USA opened their World Cup run on Monday with a 1-1 draw against Wales.

According to a Fox Sports PR tweet, the match drew 8.3 million viewers. The USA did not qualify for the 2018 World Cup in Russia.

A record 3.57 billion people watched the 2018 World Cup. According to the Federation Internationale de Football Association, better known as FIFA, the final between France and Croatia was watched live by a total of 1.12 billion viewers worldwide.

Tim Farrell, owner of Farrell’s Lounge Bar & Grill in Fayetteville, said business was busy for the USA-Wales game and he expects the same for today.

“You can see that in comparison to four years ago,” Farrell said of the involvement when the USA weren’t at the World Cup. “2014 was great. It was crazy. When the USA play there are twice as many spectators.”

Farrell said he expects a “huge” day today. There’s the USA vs England game and then the other kind of football – Arkansas in Missouri at 2:30pm

Brian Deluna, assistant manager for the Buffalo Wild Wings in Springdale, said he called people at 10 a.m. Tuesday to see if the Group C game between Mexico and Poland was available. The shop doesn’t open until 11 a.m., but 15 tables are full of people who came to watch the World Cup at lunch, he said.

The World Cup consists of 32 teams playing in eight groups, A to H. The top two finishers in each group advance to the knockout stage round of 16, which begins December 3.

Brazil have the most World Cup titles with five but have not won the trophy since 2002. Germany and Italy are in second place with four titles each.

Miguel Turcios from Jason’s Sports in Springdale said he is a Brazil fan. The team’s yellow and green jersey is one of the most recognizable jerseys in world football. But he said that most people who come to the store ask for Mexico jerseys.

Bentonville West girls soccer coach Kerry Castillo set up a 45-minute flex period dedicated to the World Cup, which will begin Monday. Teachers are allowed one non-academic lesson per week, he said. Students can gather to talk about the World Cup.

“There are a lot of kids here who have raved about it,” he said of the World Cup.

Castillo is a Spain fan. Spain beat Costa Rica 7-0 in their first Group E game on Wednesday. The group also has Japan and Germany.

Castillo will also keep an eye on the USA-England game. The Three Lions defeated Iran 6-2 in their opening game.

“In my opinion it’s a treacherous game,” he said. “Can we make it out of the group? I don’t know. They have to get a point in the next two games.”

England will be a step further than the US in Wales. England is ranked 5th in the world by FIFA.

“They bend,” Castillo said. “You score six goals in your first game, you play everything. It was a statement game. They’re one of the buzz teams.”

England have a World Cup trophy, having beaten West Germany 4-2 on home soil in 1966.

Mike Devaney, Head Soccer Coach at Bentonville High School for 18 years, grew up in England between Liverpool and Manchester.

He said USA’s return to the World Cup was huge after the disappointment of missing out four years ago.

“The casual fan won’t be watching if the US isn’t there,” he said. “People were excited before they played on Monday.”

Regarding tonight’s game between USA and England, he said a draw would be important for USA to successfully exit the group.

“You can’t get up early and chase the game,” he said.

Soccer is the most popular sport offered by the Bentonville Parks Department. More than 2,400 children. There is an adult league with 32 teams, which includes a further 480 players. That compares to 1,200 kids in baseball and 350 girls in softball in the city leagues, said Josh Stacey, parks service manager.

“I’m sure there will be a group of kids that will come out to play football that will be inspired by the World Cup,” he said. 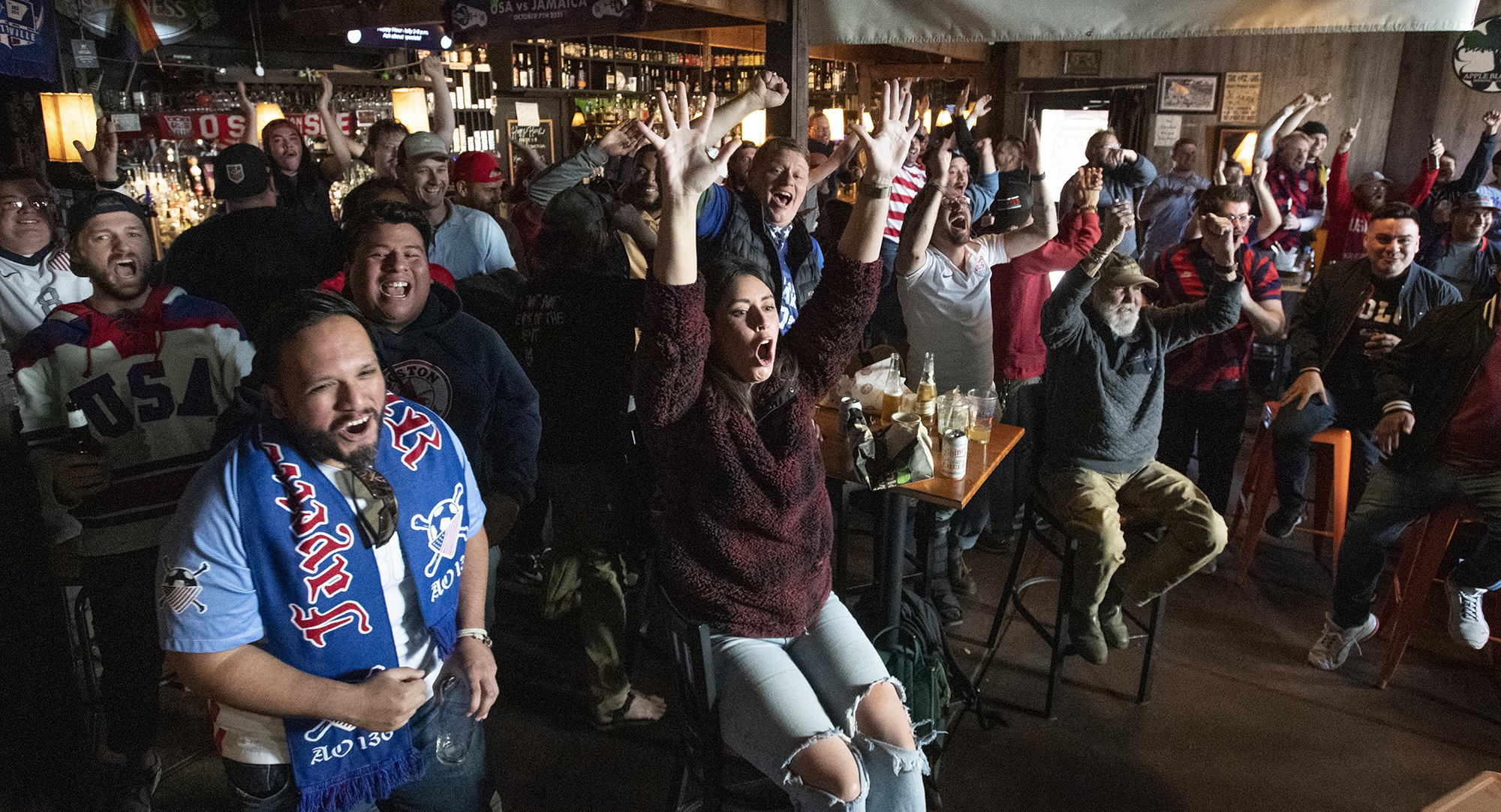 Football fans cheer on Monday, November 21, 2022 as the United States team scores against Wales during the World Cup game in Qatar. More than a hundred fans crowded into the Smoke and Barrel Tavern in Fayetteville to watch the game. The US team drew 1-1 with Wales and will play England on Friday at 13:00. Visit nwaonline.com/221122Daily/ for today’s photo gallery. (NWA Democrat Gazette/JT Wampler)